The Blyde River Canyon is the third largest canyon system and the largest vegetated or green canyon in the world.The canyon is situated along the Mpumalanga, Drakensberg Mountain Escarpment. The Blyde River Canyon was proclaimed a nature reserve in November 1965, covers an area of 30 000 hectares and stretches from the Pinnacle rock near Thaba Tsweni lodge to Mariepskop Mountain in the North, close to the Kruger National Park.

There are five main river systems that influence the Blyde River Canyon Nature Reserve and play a very important role as water catchments for the Kruger National Park. The rivers are the Sabie, the Blyde, the Treur, Ohrigstad and the Olifants rivers. 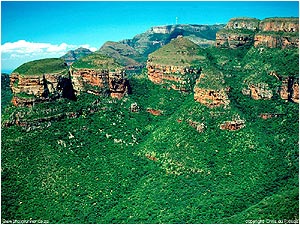 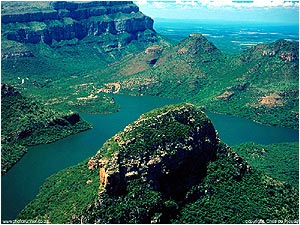 The Blyde River Canyon is of great geological, botanical and wildlife interest to the tourist. Some of the oldest rocks in the world are exposed in this area and this includes rare sights, such as two Tufa waterfalls. Five of the South African Veld types occur in this area namely the Sour Montane Grassland, Subtropical Rainforest, Riparian Forest, Sour Bushveld and Mixed Bushveld.

The Canyon has a rich and varied fauna and flora, influenced by the altitude,  climate and soil conditions of the area. Some highly endangered species occur here such as the Blue Swallow and Taita Falcon.

Most of these natural wonders can be viewed participating in activities done by vehicle or on foot, in the Blyde River Canyon while using Thaba Tsweni Lodge as your base. 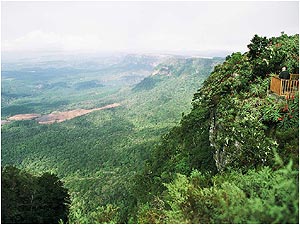 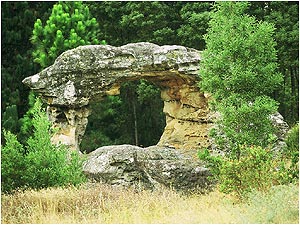 The Blyde River Canyon is also of historical, anthropological and ethnological interest to the tourist. The presence of prehistoric man in the Canyon, has been confirmed by the discovery of middle stone-age implements, dating back some 50 to 100 thousand years ago (BP). These implements have been found to be in the form of hand axes, flake and core tools. A visit to the echo caves and the San (bushman) rock shelter is essential, it’s also an easy drive from Thaba Tsweni Lodge. There is further evidence that early stone-age San lived in the canyon, in the form of their monochromatic rock paintings found in the area.

At a later period, the San were forced out of the Canyon by the immigration of the Sotho group of Negroid races from the north, which included the Bapedi tribe.

Evidence of all stages of iron-age activity by the two main tribes in the area are to be found in the Blyde River canyon.

The two main tribes active in the area, were the Bapedi and Swazi tribes. They were engaged in numerous battles with each other, which adds to the interest of the area.

The final battle, the battle of Moholoholo meaning the great great battle, was fought in 1864 around the mountain of Mariepskop. This Mountain has been named after the Mapulana Chief of the Bapedi tribe, Maripi Mashile, who assisted and led the Bapedi tribe to victory.

The first white settlers to migrate to this area, arrived here about 1844 and brought about ownership of land and aggression between the African and White people.

The arrival of white Settlers, brought about the discovery of gold for commercial purposes (the Negroid races had been using gold for trade for many centuries).

This discovery, of workable gold in the Blyde River Canyon in the 1870’s, led to the production of the first Hydro-electrical power station in the Southern Hemisphere in 1910. This power station called the Belvedere Power Station can still be viewed today,  while participating in the Belvedere Hike which departs from the Bourke’s Luck Potholes. It is interesting to note that the power station, which provided power to Pilgrims Rest and the surrounding mines, allowed Pilgrims Rest to have electricity before London in the United Kingdom.